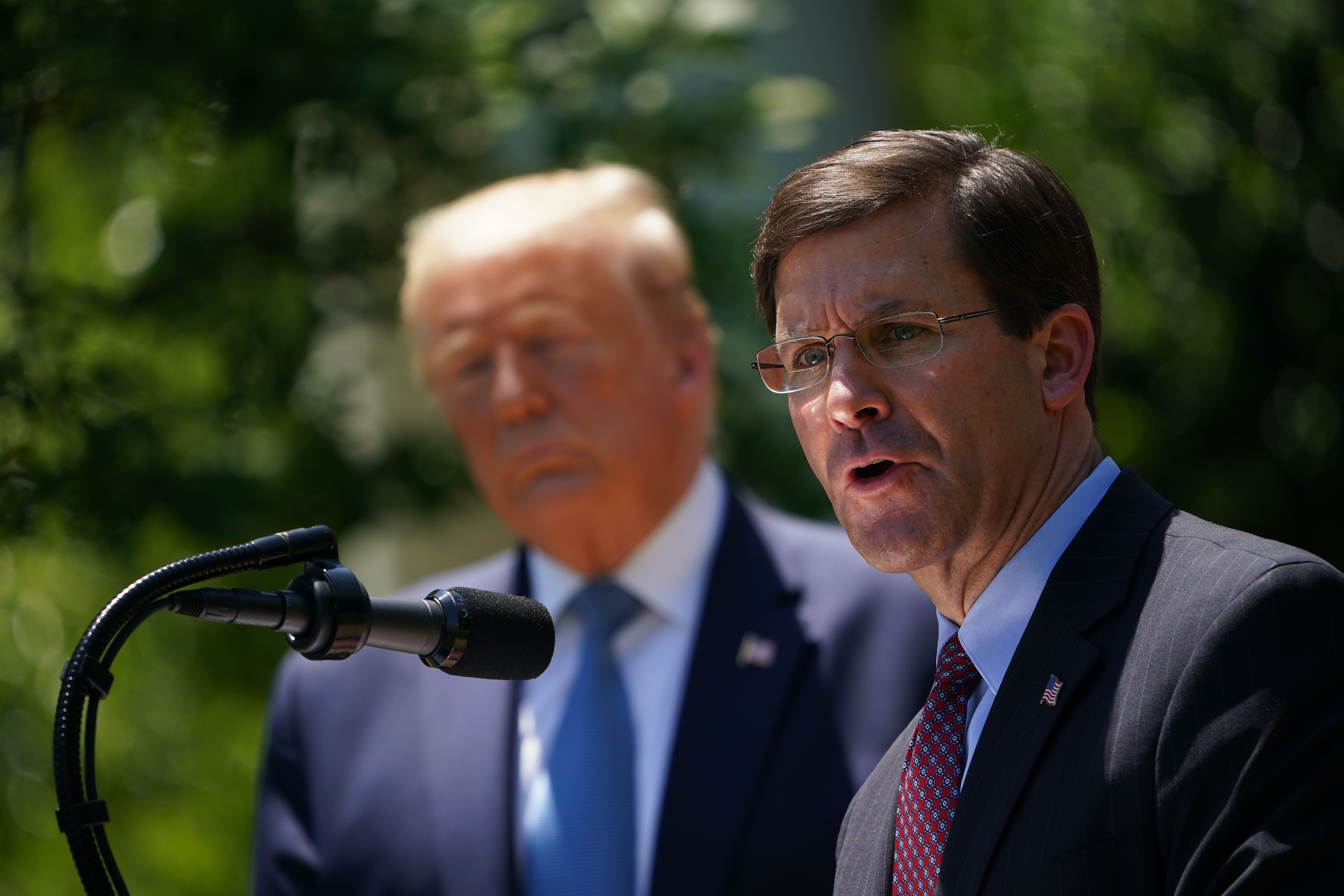 There’s a lot of troubling but clarifying information coming out tonight about the military deployments in Washington, DC. Reporting from the Times suggests what has seemed apparent by inference, which is that the White House and the Pentagon have spent recent days in a tug of war over the deployment of regular Army combat forces into DC. The Pentagon has resisted but President Trump has insisted, apparently wanting to keep them at least just outside the city as an ongoing sign of strength. This afternoon he appeared to finally relent and agree to allow them to return to their home bases. There’s another dynamic I’ve noticed that has gotten little explicit attention.

TPM Reader TC chimes in from the world of medical research …

I’m a health researcher and deeply involved in similar work- aggregating data from large electronic health record databases. Many large medical centers care for ~1M patients per year, but even with all the COVID cases, one needs to aggregate ‘like with like’ data across multiple databases. There are standard informatics and statistical reasons to do this. So the overall methods are actually similar to several large national projects currently being stood up by NIH, CDC and PCORI, among others.

I’ve been impressed with the dedication of the analysts and researchers. While we can work quickly, seeing that study put together in a matter of a few weeks harmonizing data across hundreds of hospitals did not meet a credibility test. Even more odd was that this was a company that lots of folk in the field was not familiar with. Not being snobbish, but this is not a huge field. There are standards for transparency and data harmonization and the study seemed to skate over many of them.

At one level, the system worked in that researchers quickly identified problems. But, could it have stopped at peer review? If the reviewers weren’t familiar with ‘federated data methods’ that may have accounted for the lack of rigor in review. Your point about the pressure to ‘get the information out there’ is a good one.

I am sure there will be a lot of discussion about this, as well as focus on having methods standard for this type of research become much more explicit.

A few days ago I flagged that that big hydroxychloroquine study published in The Lancet was becoming a major and substantive controversy. The questions raised about it went well beyond critical questions of interpretation or how one structures a proper study or review to questions verging on accusations of fraud.

Today The Lancet officially retracted the study. This was followed a short time later by The New England Journal of Medicine retracting a separate study that was not about hydroxychloroquine but relied on data from the same company, Surgisphere.

Needless to say, this is a major scandal, possibly a major fraud perpetrated on two of the world’s most respected medical journals. It had immediate, real world impacts, halting on-going double blind studies on hydroxychloroquine. The Lancet study was withdrawn (I would think nominally) at the request of the authors not connected with Surgisphere. Sapan S. Desai, the owner and founder of Surgisphere was a listed author on both studies.

The world of medical research and publishing is one I have no real insight into. I’m sure many who have insight will be discussing this at some length. Suffice it to say the COVID epidemic has seen a dramatic rush of publication in advance of peer review, for I think obvious and good reasons. This was a peer reviewed, officially published study. But it seems highly likely that the understandable and largely salutary drive to move clinically relevant new information into print is tied in some way to this debacle.

Special thanks to TPM Readers BD and JB for helping me be on top of this story. “The nation must restore order,” the sub-headline read. “The military stands ready.”

There are many people who can explain to you more intelligently than I why this op-ed was dangerous, racist, and ignorant. I want to explain to you why the defense of this op-ed by Times’ publisher A.G. Sulzberger is eye-openingly bad.

You can read the full “defense” here. I want to focus on this passage:

The op-ed page exists to offer views from across the spectrum, with a special focus on those that challenge the positions taken by our Editorial Board. We see that as a source of strength, allowing us to provide readers with a diversity of perspectives that is all too rare in modern media. We don’t publish just any argument — they need to be accurate, good faith explorations of the issues of the day — and there are many reasons why Op-Eds are denied publication. It is clear many believe this piece fell outside the realm of acceptability, representing dangerous commentary in an explosive moment that should not have found a home in The Times, even as a counterpoint to our own institutional view. I believe in the principle of openness to a range of opinions, even those we may disagree with, and this piece was published in that spirit. But it’s essential that we listen and to reflect on the concerns we’re hearing, as we would with any piece that is the subject of significant criticism.

It’s a whole new level of absurd to expect readers, upon finding an op-ed in the New York Times, to think, “Oh, well this is just to challenge the New York Times editorial board’s own view” — one reason Sulzberger gives for why the Times’ published Cotton. Nobody thinks that. It’s delusional, ivory tower thinking.

Even if readers understood that that was the purpose of the op-ed, how can that be a benchmark for what is published? As Sulzberger goes on to say (admit?), “We don’t publish just any argument — they need to be accurate, good faith explorations of the issues of the day — and there are many reasons why Op-Eds are denied publication.”

What? Did he read Cotton’s piece? A foundational premise is that the protests are solely about George Floyd’s death. That in and of itself is incorrect. How is that accurate? And how is a passage like this in “good faith”?

But the rioting has nothing to do with George Floyd, whose bereaved relatives have condemned violence. On the contrary, nihilist criminals are simply out for loot and the thrill of destruction, with cadres of left-wing radicals like antifa infiltrating protest marches to exploit Floyd’s death for their own anarchic purposes.

I find in many ways this defense more troubling than the op-ed itself because it betrays a dangerous rubric: If it’s so important for the Times’ to publish things that challenge its own editorials, what else are they willing to publish? How far does this “spectrum” go? The KKK is on a spectrum. Stephen Miller is on a spectrum. When will it be their turn? Separately, will the Times be publishing any thoughts from antifa supporters? Black Bloc, perhaps?

The New York Times opinion page is broken and has been for a long time. It’s infected with dangerous “both-sides” thinking. I can’t really put it any better than Jay Rosen, who wrote on Twitter:

The emerging divide in journalism is not between "let all relevant arguments be heard" and "don't publish opinions we find repulsive." It's between those who ask, "is this something we should be amplifying?" and those who don't see the importance of putting the question that way.

I hope the Times reconsiders how it uses its opinion page. In 2020, publications — especially ones like New York Times — have a responsibility to monitor what they amplify. There are million of other publications, Mr. Sulzberger. You didn’t have to give him your platform, and your defense is navel-gazing nonsense. The world can not be defined simply in terms of the Times’ editorial writers and the opposition to them. One of the essential features of Trump and Trumpism is the way he has - both in his person and his movement ideology - managed to bring all the contradictions and controversies in our society furiously to a head. In a matter of days not weeks we have managed to skip from the intricacies of a public health crisis to racism and police violence to the state cornerstone of civilian-military relations and the rather essential question of whether the President is threatening some sort of distended military rule. The Senate majority leader rarely straightens his spine to break with President Trump. And when he does, you can always expect push back about as stiff as a wet noodle.

Trump and Barr are patrolling DC with federal prison guards from the units trained to deal with prison riots and emergency situations in federal prisons. These appear to be at least some of the federal police who have been refusing to identify themselves on the streets of DC.

Whatever you can say about these teams and the tactics they use these are not people you want doing crowd control with civilians.

Just In: NBC’s Mike Kosnar obtains a statement from the Bureau of Prisons about their un-badged officers in DC. It’s long so I screen-shotted it, and their previous statement, sent upon their deployment pic.twitter.com/BbTdJNDpBg 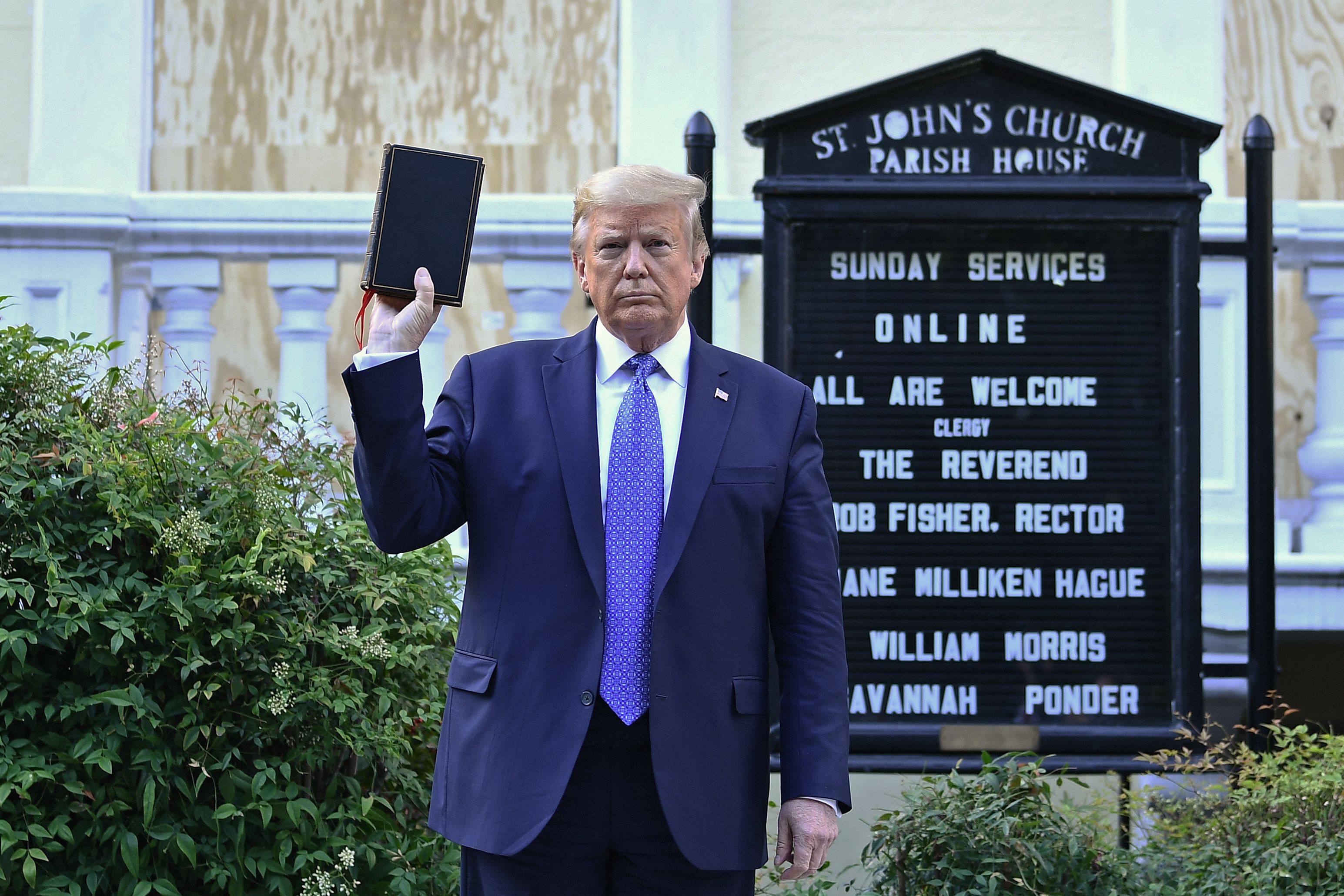 As I've said, living in history is about not knowing the future. We are in a very volatile, unpredictable, dangerous moment in the history of this administration and indeed the history of the country itself. The stunt in front of the White House on Monday is not wearing well. It has the feel of one of those gambits employed by an embattled strongman which does both too little and too much, exposes weakness while galvanizing opponents. In the brittle late 20th century states of Africa and Latin America these moments would rapidly force a decision to massacre demonstrators or start lining up a flight to the French Riviera or exile in Saudi.

Only a couple hours ago, the AP reported that the Pentagon was beginning to send regular Army troops deployed to DC back to their home bases. Now Secretary Esper has abruptly reversed that order. Seems very likely that the White House found out – quite possibly from the news report – and ordered Esper to reverse course.